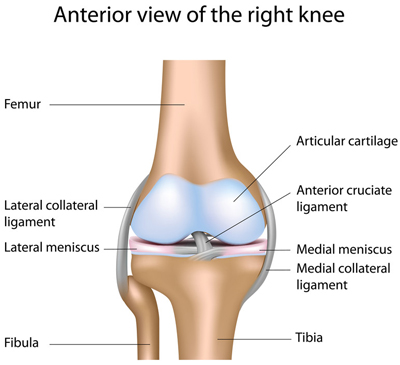 The human knee is a hinge joint. The femur (upper bone) and tibia (lower bone) make up the hinge. Attached to the tibia below the knee is the fibula. This very small bone’s principal function is as a muscle attachment site. The patella, or knee-cap, sits in front of the knee. Simply put, it is a "bone within the tendon of the quadriceps muscle." The patella functions as a pulley allowing the contraction of the quadriceps muscle of the thigh to straighten the leg.

All the bony surfaces, within the joint of the knee, are lined by hard, smooth, shiny articular or chondral cartilage. This cartilage is almost marble hard and super smooth to allow friction-free motion of the knee.

The knee has two menisci, which are C-shaped soft cartilages, functioning as shock absorbers. Both the medial (inner) and lateral (outer) compartments of the knee have a soft cartilage shock absorber. This meniscal cartilage is anchored to the bone only at its anterior and posterior extreme points. This allows the rest of the cartilage to expand outwards with load thus performing a shock absorber function within the knee. The meniscus also improves the congruency of the two articulating surfaces of joint.

The knee is constrained and stabilized by four major knee ligaments. The collateral ligaments are on either side of the knee and prevent instability or excess motion in the side to side (varus to valgus) plane.

The anterior and posterior cruciate ligaments lie in the very centre of the knee joint itself and give stability in the front to back (anterior posterior) plane.

There are smaller "accessory" ligaments, which are mostly thickenings of the joint capsule which support the functions of the four major knee ligaments. 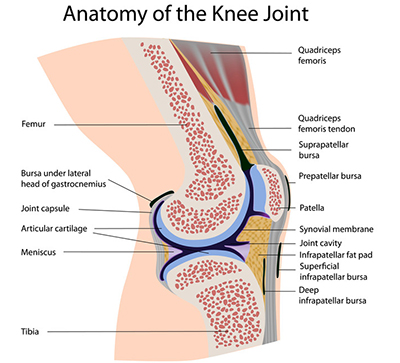